A questionnaire about Nell 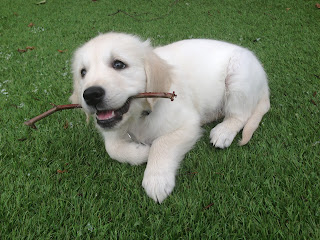 Today I have some photos to share with you, which our inventors sent to us. Their Golden Retriever puppy has finally arrived! We have all spent a lot of time crowding around Trig's computer inside the silver thing on the marsh (if you don't remember how that got here, you can read this action-packed post). We think she looks very cute. 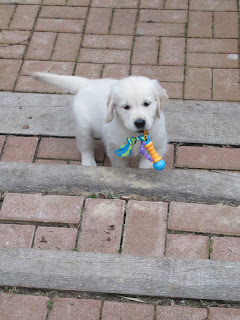 We sent our inventors a questionnaire to answer so that we could find out more.

What is the new puppy's name?

Our puppy is called Nell. As soon as we knew we were getting a puppy we spent a lot of time discussing names. We loved the name Nina, but we realised when you shout it aloud several times, as you would do in the park, it suddenly sounded as though you were pretending to be a fire engine...when you're picking a dog's name it's a good idea to practice how it sounds when you have to say it over and over again in a public place. Choosing a name for a pet is very different from choosing a name for a person. 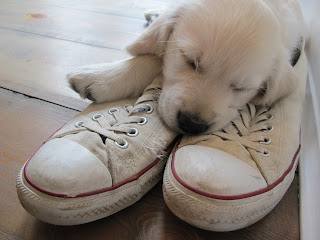 What does Nell do all day?

Nell sleeps a lot (which is good as it means we can carry on with our work designing more Squeeble apps). She likes to sleep at our feet and when there are no feet around she finds a pair of shoes to sleep on. However, when she wakes up she needs lots of attention and she likes to play with all her toys, but she also enjoys learning. So far she has learnt to sit, offer up her paw and also to wait patiently for a treat. She's also starting to learn to fetch toys that we've thrown, but if we throw the toy too far she forgets that she is meant to be bringing the toy back. 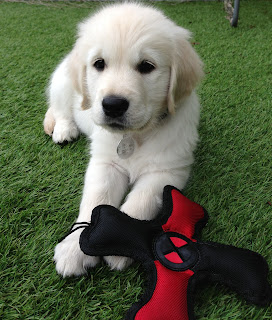 What is Nell's favourite thing?

This week where we live with Nell, it snowed. Nell loved eating the snow and she gets very excited when she's allowed out to play in it. When it's not snowing, she loves to race around the garden with a branch in her mouth at full speed with her ears flapping in the wind behind her. She looks very sweet, but slightly bonkers when she's doing this. She also likes to eat stones, so we have to follow her around the garden trying to get the stones out of her mouth. Having a puppy is very hard work.

She looks quite lively. We've read about puppies and it sounds like they can be a LOT of hard work. What is the most difficult thing about having a new puppy?

What does Nell like to eat? And do you think she would eat a Squeeble if she came across one?

Nell likes to eat a bowl of puppy food four times a day. She also loves to eat the treats she's given as a reward for when she's done something good. She loves banana, apple, carrot and cheese. Her favourite thing is ice-cubes made from frozen yoghurt and peanut butter.

I don't think she would eat a Squeeble. She hasn't attempted to eat our two cats, so I'm guessing that if she saw us talking to you and smiling at you, she'd understand that we liked you and would know that it would not be okay to eat you. But don't worry, you're either safely inside my laptop or on Squeeble Island - Nell can't get to either of those places.

Will the Squeebles ever have a pet?

We hadn't realised you might want a pet! That's a great idea. Yes, maybe one day you'll be able to have a pet of your own. We could even put one into one of the apps. Why don't you all discuss what type of pet you might like and when we have some spare time we could work on designing one for you.

I hope you enjoyed reading the answers to our questionnaire as much as we did - we're hugely relieved that Nell would be unlikely to eat us. We're off to discuss what kind of pet we might like now.

Hello there everyone! I'm Whizz from the Squeebles educational apps.

I'm writing this blog (which is a bit like a diary on the Internet) so that I can share some of the adventures the other Squeebles and I get up to here on Squeeble Island.

I'd love to feature your Squeeble-related artwork, designs, stories or questions on the Meet the Squeebles blog. You can send things in to me at whizz(at)meetthesqueebles(dot)com

The Maths Monster has taken the Squeebles prisoner and you have to help Whizz rescue them!

Answer spellings to earn stars and trade them for Squeeberangs to use in a fun mini-game!

Help Ruby get her ice cream parlour up and running by answering maths questions correctly.

Compete in the squeeble-cart rally by answering addition and subtraction questions.

Help Whizz rescue even more Squeebles from the Maths Monster by doing your division.