We've been busy playing a new game over the last few weeks, one which we discovered quite by accident! 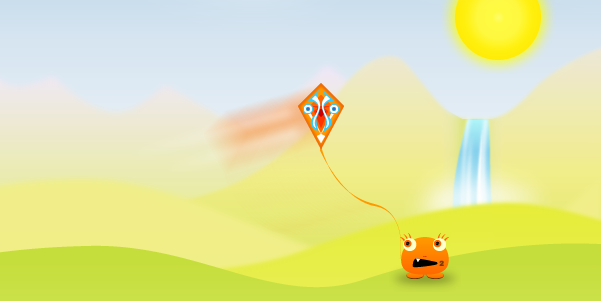 Jingo was flying his kite over the hills one day when a sudden gust of wind caught it with such  unexpected force that Jingo found himself being lifted from the ground! When the wind dropped he found himself plummeting down over Sparkle Falls, the tallest waterfall on Squeeble Island. He somersaulted his way down the waterfall, letting out yelps of horror as he went, terrified of what would happen when he reached the bottom. 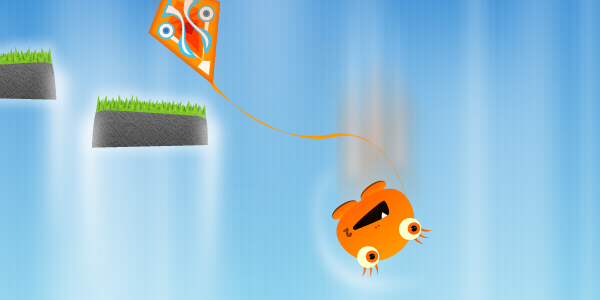 But what happened when he did reach the bottom was almost more surprising than unexpectedly finding yourself hurtling down a waterfall. His landing was surprisingly soft and he could feel himself sinking fast, but somehow he felt quite dry and cosy. It was only when he bobbed up to the surface again that he realised that both himself and his kite were inside a glossy bubble ball that bounced around in the water keeping him perfectly safe.

But only moments later, one of the large Flipfish, who live in the pool beneath the waterfall, caught Jingo's bubble ball on the end of his tail and flicked him all the way to the other side of it. 'Whoooooooaaaa' Jingo screamed from inside the bubble as he flew through the air before landing in the water and bursting. He was nearer to the water's edge and able to swim quickly to dry land, where he sat for a while, blinking in the sun, feeling quite confused by what had just happened. 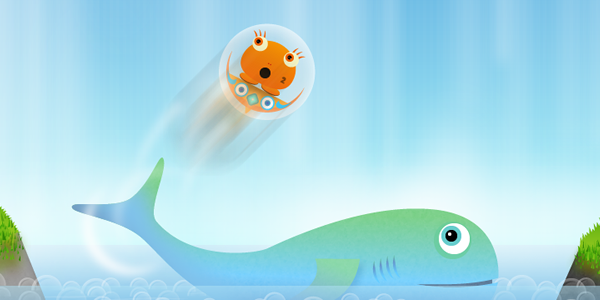 When Jingo told us all about it we were amazed. We couldn't quite believe him. Lex suggested we get Jingo to take us to exactly where he was flying his kite when the gust of wind caught him to see if happened again. We all went up to the top of the hill where Jingo had been. 'I think it was just about here...' he was saying, when suddenly he was blown off his feet again and we watched in amazement as he was carried over to the waterfall and then suddenly dropped right above it. We ran over to the edge and watched as a tiny bubble appeared right at the bottom and then all gasped as we saw a Flipfish hit the bubble with its tail to send Jingo flying!

A few moments later we could hear Jingo's happy shouts. 'That was amazing! Wooohoooo!' he was shouting.

And so the next day we all brought our kites up to the top of the hill and when one of us is in just the right spot to catch the wind, the game begins. Squeeble Island is a very, very magical place indeed!

Hello there everyone! I'm Whizz from the Squeebles educational apps.

I'm writing this blog (which is a bit like a diary on the Internet) so that I can share some of the adventures the other Squeebles and I get up to here on Squeeble Island.

I'd love to feature your Squeeble-related artwork, designs, stories or questions on the Meet the Squeebles blog. You can send things in to me at whizz(at)meetthesqueebles(dot)com

The Maths Monster has taken the Squeebles prisoner and you have to help Whizz rescue them!

Answer spellings to earn stars and trade them for Squeeberangs to use in a fun mini-game!

Help Ruby get her ice cream parlour up and running by answering maths questions correctly.

Compete in the squeeble-cart rally by answering addition and subtraction questions.

Help Whizz rescue even more Squeebles from the Maths Monster by doing your division.